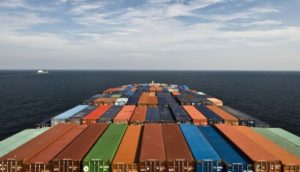 The volume of marine shipping containers sent from Asia to Europe has reached an all-time high for January to March this year, with healthy European private consumption driving the growth.

Some 3.81 million twenty-foot-equivalent units, or TEUs, traveled that route in figures released Wednesday by the Tokyo-based Japan Maritime Center. This marked a 5.2% surge from the record logged a year earlier.

Volume rose 8.4% to 1.35 million TEUs for March alone, rebounding from February’s dip. In typical years, shipments during and after March soften before the summer-demand period. But demand for furniture, clothing and other goods has proved brisk this year, especially for shipments to the U.K. Cargo bound for oil producer Russia has also increased amid the petroleum price recovery that began last fall.

Shipping fees are also trending upward. Spot rates for Asia-Europe freight now come to around $960 per TEU, up 18% from the most recent low plumbed in late March. Shipments will hold steady for the time being, according to a major marine transporter, meaning that rates will likely be on the high side for the immediate future.